Another way to make a review in Mirada is to create a video comment containing a record of manipulations with a media file and a synchronous audio track with the commentator’s voice. To start recording a new track, click the corresponding button in the new comment block.

During the recording, the new comment block displays the duration of the track and the Stop button.

You can speak out your comments to the media file and simultaneously record subsequent manipulations with this file, including:

In addition, you can make sketches during the recording. Such sketches will also be saved and they will be displayed during playback of the comment.

To complete the recording of a track, click the Stop button in the new comment block. After that, you can add a text message and click the Post button. As a result, a new comment will be created and linked to the original frame from which the recording started. 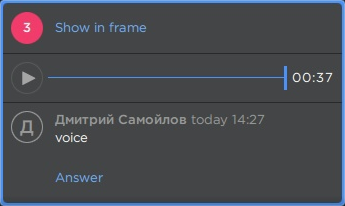 The middle block inside the comment contains a track and the Play/Stop button. Press this button to play back the voice track and the synchronously recorded manipulations.