After launching, Mirada gets a playlist with a separate media file or a set of files. When a file is opened in Cerebro, a list with one item is usually created. Exceptions are cases where several files are opened simultaneously, or when a file is added to a previously opened Mirada application.

The Lista panel displays a list of media files in the order in which they are to be played. 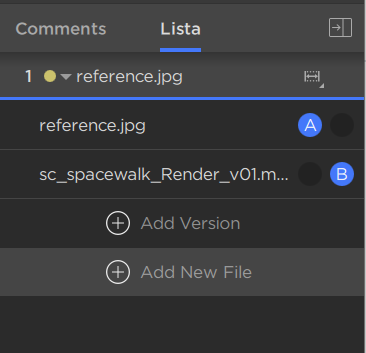 Mirada’s playlist is not just a sequence of files, because each list item can also contain multiple versions of the same media file, meaning different versions of the file with some changes and additions that occur during the production process.

For example, if the task’s forum in Cerebro contains several versions of the same video, you can select all the versions at the same time and click the Compare button. In this case, the selected versions will be uploaded as a single Mirada playlist item.

In general, the number of versions of one file is unlimited, while the viewer displays the version that is currently active (the A version), or two versions (A and B) simultaneously, if the Compare mode is enabled (see the “Comparing Media Files” section).

You can use the following buttons on the Lista panel to make changes to the playlist that was uploaded to Mirada:

The same actions can be performed using Drag&Drop technology. For example, you can drag a file attachment from Cerebro or a file from your local hard drive to the Mirada window. In this case, the following two options for adding a file are supported: you can add it as a media file to the end of the list or as a version for comparison into the current playlist item. 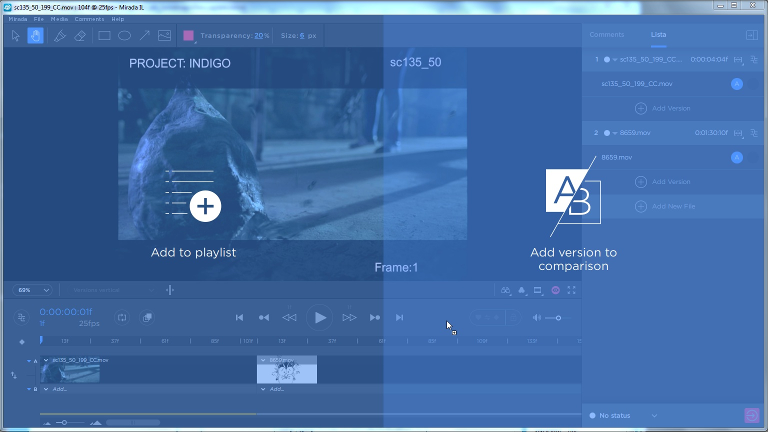 Note
The difference between simply adding a file to the playlist from opening a file attachment from Cerebro is that in the first case you can only save a review on the local drive, while in the second case you can also send the created review back to Cerebro by attaching it to a new forum message.

Other commands for working with the playlist are available in the File section of the Mirada main menu. 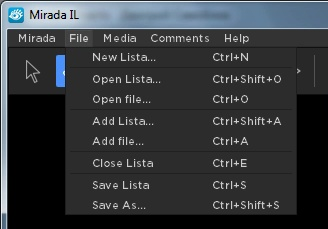 Note
When you save the playlist to your local drive, all available comments to the list items are also saved (see the “Comments” section).