What do they represent?

Status - this is a task property that describes its current state. With the help of statuses it is possible to adjust the sequence of working stages on the task.

We have set up a list of statuses by default, but in no way we are not limiting the right to remove your unwanted and add new statuses to suit your production.

Status management tasks performed in the "Administrator" on the "Status task" tab. 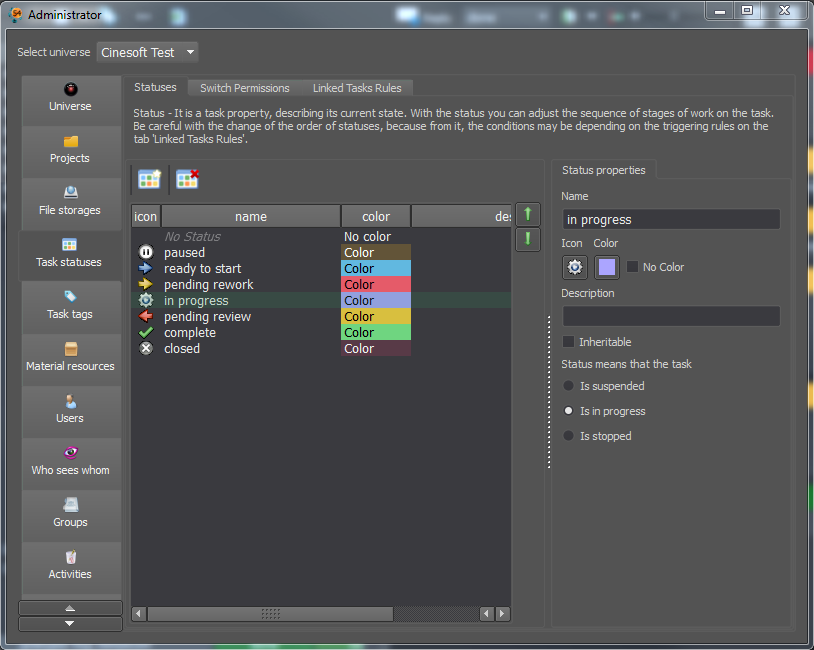 - Icon and colour: they appear in different representations of tasks (navigator, Gantt charts, etc.) when the task is in a particular status;

- The "Inherited" means that the status can be set directly on the branch of tasks, and the status will be inherited by all sub-tasks. Inherited, by default, is the status of "paused", "complete" and "closed";

- Status categories: Waiting, in the work and stopped means the global status of the task. They are necessary for the collection of statistical data.

Statuses also have the order which affects the display of the lists, task switching proposals to the next status and also it participates in the rules of automatic task switching (more on that below).

The ability to switch the status of the task exists when the user has permissions to create a particular type of message in the forum. For each element of the access list, you can configure the available switching circuit. 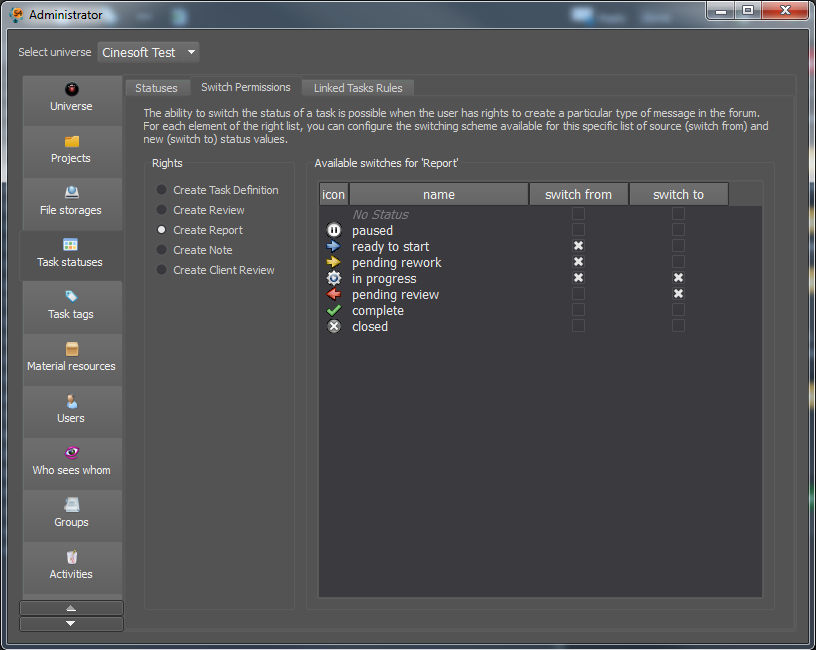 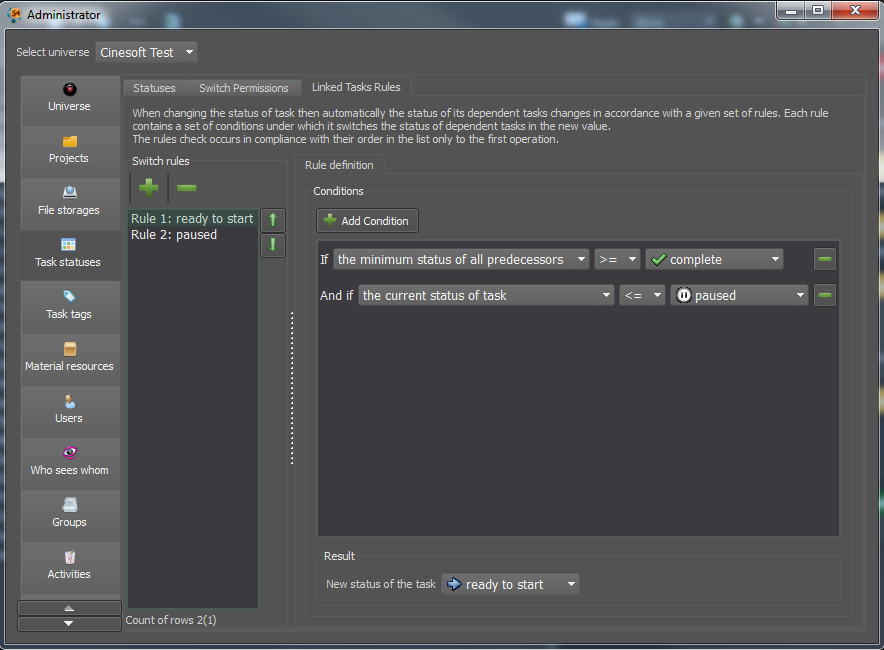 By default, we made two rules:

- Change in the task status "ready to start", if all predecessors have received the status of "complete" or "closed";

- Change in the task status "paused", if any of the below predecessors Accepted status "complete".

You can also edit and add rules to your own needs.

Updates are accumulated on the upper levels and are shown in the Navigator in the form of column colored rectangles proportional to the amount of certain statuses of tasks within the branches, starting with the status from the lowest order.

All status switches are recorded in the forum in the form of messages. 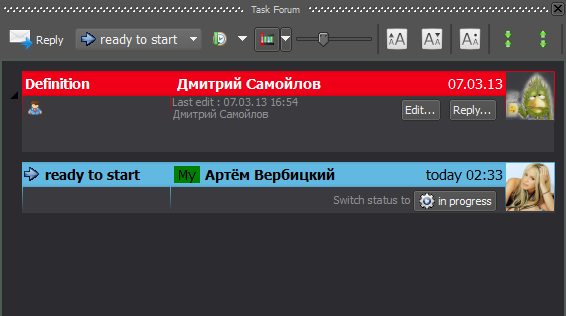 In the final message on the status switch, a button is located with a proposal to switch the status to the next status depending from the rights for switching status.

Regarding the progress bar

- opinion of one of the developers.

Statutes are substitutiong the progress bar.

Indeed statuses show a more realistic picture of the production process. While opinions on this matter is not at all ambiguous, and therefore we left it without changes. If with the adding of new status features, throughout the time using the progress bar in the form in which it is presented will come to nothing, we will remove / change it.

Based on the prgoress bar we added up the statuses on tasks, that is why therefore now you may not use the progress bar anymore.

Recalculation occurred in the following manner:

- tasks with the progress of 100% given the status of "complete";

- tasks in which there is at least some progress is assigned as status "in progress";

The order of tasks allows you to arrange tasks in order of their execution (or any other convenient manner.)

In the Gantt chart, all the tasks are sorted now just by the order.

Note, now using drag and drop, you can move tasks.

In all linear lists of tasks, such as "To Do List", "Followed Tasks", etc. The folder tree appeared for fast finding the correct tasks. 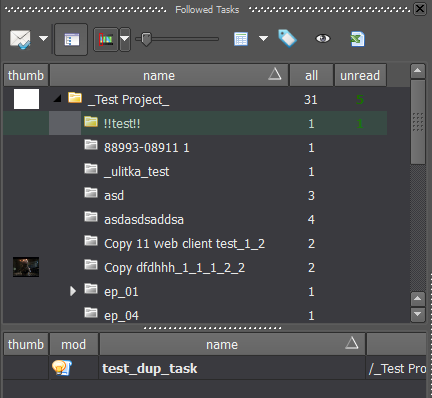 In activities now there is an opportunity to set the color. 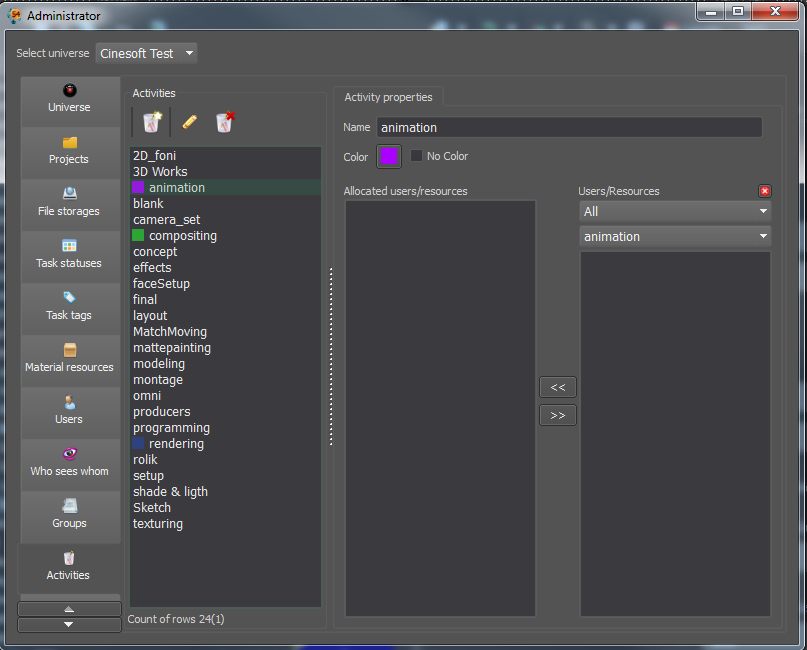 Now, in the Navigator and in the Gantt chart, it is possible to highlight with the color of activity of a tasks that have been assigned to them.

To customize the display of all panels a new button appeared

. Clicking on it will open a window " task displaying": 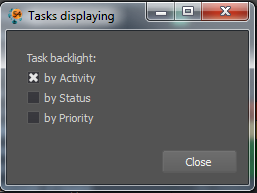 So far in it only brightness adjustment is available, but soon there will be other various display settings.

In statistics, on projects, column for prior payroll has appeared.

It is calculated based on the scheduled hours, the rates of the people assigned to the tasks and the default rate on the project (if there is no one assigned on a task).

Default rate can be set in the "Administrator "m in the projects tab.

Sorting in the forum

Now you can sort the messages in the forum, in reverse chronological order (as in social networks). sorting can be switched

on the panel forum.

The possibility of choosing the level of tracking

The button "Read all" in the tracking tasks

On the panel "Followed Tasks" a new button appeared "Read all"

At that perhaps for now. Enjoy your work and even more enjoy your holidays