Task multi-edit window pops up when you perform external task insert, multi- rename or task replication. It works similarly, except some minor deviations. You can specify new (in case of insert and replication) or existing (in case of multi-rename) task names using templates, regular expressions and paste from clipboard. 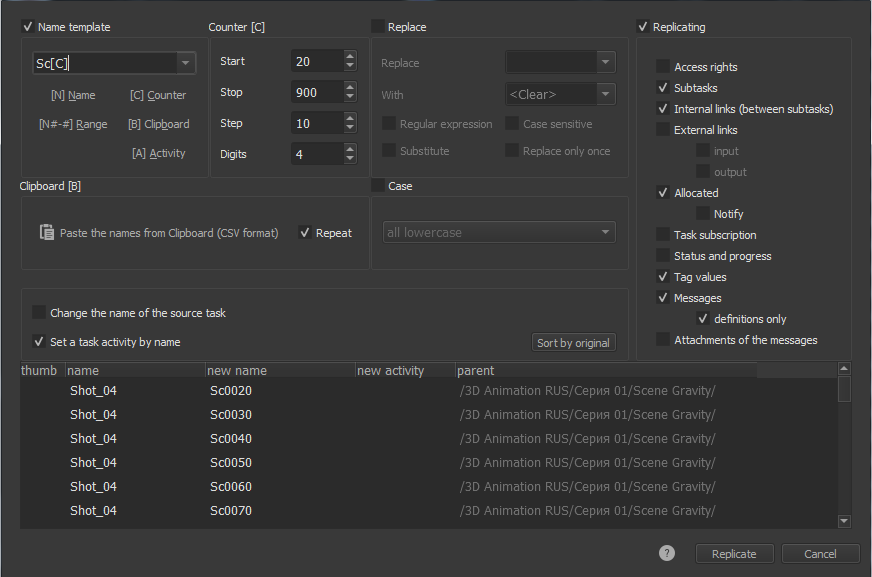 Any string containing substitution parameters can be used as a name template. These parameters are substituted with actual values when a new name based on the template is created.

For example the “Test Task” name is transformed to “est T” string by [N2-6] template.

[C] - counter. The counter inserts sequental numbers into new names. The counter options can be set in the Counter [C] group of controls

[B] – this part of the name will be pasted from the clipboard. Actual paste is performed by clicking the Paste the names from Clipboard (CSV format). If you want to paste several strings and substitute them in the sequence of task names the text must be in the CSV format. It means that it contains a list of task names separated by a line break. For example you can copy to clipboard one column from the Excel spreadsheet and paste it using the mentioned button.

Enable Repeat checkbox if you wish that the list of inserted strings should be repeated when the number of tasks exceeds size of the list.

In case of task replication amount of task names is defined by number of pasted strings.

Name template can contain one or more substitution parameters. It can contain plain text which will be copied into new task names along with that parameters.

You can customize some text replacing which will be performed with task names after their creation by template. You can use plain text substitution or regular expressions.

Substitute – if the expression is found then the entire task name should be substituted.

Replace only once – if there are multiple occurrences of searched substring in the task name then only first one will be replaced when this flag is on.

The “Case” option allows to specify the case of characters in the created task names.

The Set a task activity by name flag means that the activity attribute will be set for each task if its name contains some activity name.

If you paste list of names from the clipboard or if you enumerate tasks, task order matters. You can sort task list by any column. If you wish to retain the order in which you selected/pasted task names then you should activate the Sort by original button.

In case of task replication the multi-edit window has an additional group of controls Replicating to specify replicating options. 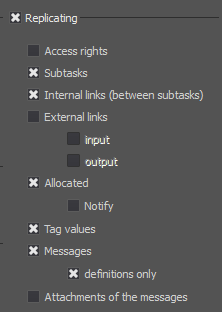 The table in multi-edit window contains list of tasks to be transformed.

If you are not satisfied with any of the generated names then you can edit them manually.

If any task happens to get into table by mistake, then you can remove it.