As mentioned, when you create a new task, you can set its properties (see “Creating subtasks and assigning executants”). You can access task properties tab at the right side of Cerebro at any time. This tab can also be accessed by selecting View/properties of the task from context menu (or by Alt+P hotkey).

There are buttons switches that determine which task parameters are visible and can be customizable in the window at the top of the window: 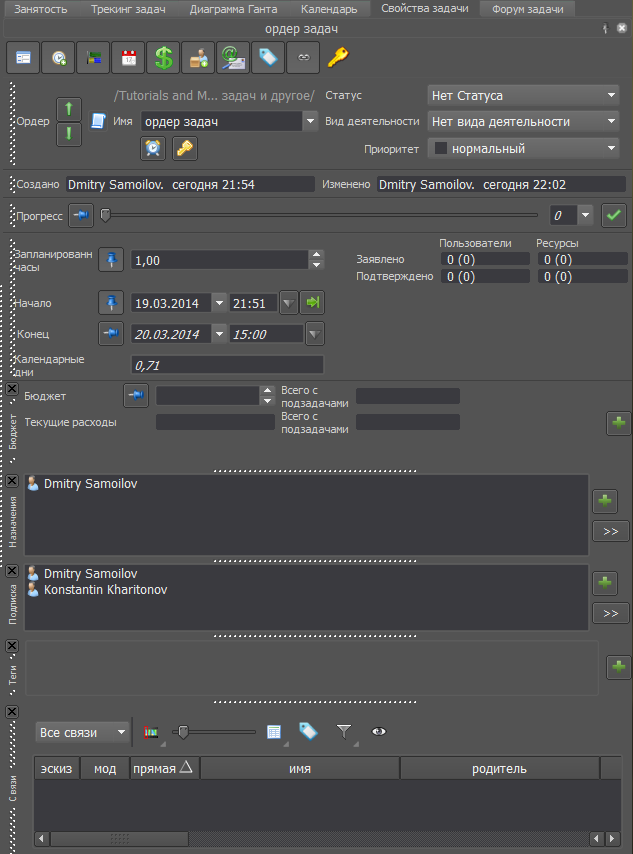 The first group is used to view and modify basic task attributes, such as:

Next group contains “Created/Modified” information with users responsible for it.

Next there is manual task progress controls. They can be defined in 3 ways:

Time parameters for the task

Further, there is a planned task time group. This group has Pin button that allows you to set planned hours for the task (ON). When it’s OFF, then planned time is calculated automatically accirting to subtasks time.

In addition to aforementioned controls, this group also has information fields that show data, such as:

Next, there’s budgeting element group (accessible only to users with special permissions). It is used to plan expenses and to control the budget for the project (“Budgeting”).

List of assigned task executors. You can add/remove them by moving them from user list (to the right) to executor list(to the left).

Next you can see a list of users subscribed for the task, i. e. people that follow that task. You can add/remove subscribers as in previous list.

Next is list of custom tags. If you have several user tags in your universe, you can adjust their values for the chosen task (see section “Task tags”).

Final element group contains list of task links. You can specify dependencies (links) between the start of one task and the end of another (see section “Gantt chart”).